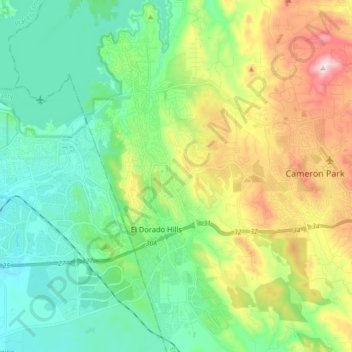 El Dorado Hills (EDH), as defined by the 2010 census-designated place (CDP), is at the western border of El Dorado County, between the City of Folsom and the unincorporated community of Cameron Park. The northern limits of the CDP are Folsom Lake and the South Fork of the American River, where river rafters use Skunk Hollow and Salmon Falls as takeout landings. West of Latrobe Road, the south edge of the CDP follows railroad tracks formerly used by the Southern Pacific between the cities of Folsom and Placerville. East of Latrobe Road the south edge follows topography running roughly east–west.