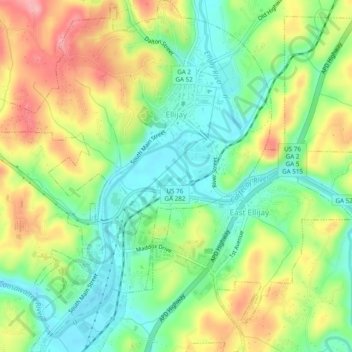 Ellijay lies within the Humid subtropical climate zone along with the majority of the rest of the southeastern United States. The highest elevations in the surrounding region reside in the Subtropical highland climate. Ellijay enjoys cool winters and warm summers, but neither would be considered extreme thanks to its slightly higher elevation than other areas in the south. Winter snowfall is common, but generally on the lighter side. There are a few exceptions, one being the 1993 Storm of the Century which dropped 17 inches of snow in Ellijay. Summers are warm, though mild for southern standards, with temperatures topping out in the mid 80s during the summer months. Rain is evenly distributed throughout the year averaging 57.97 inches per year, as reported from the nearest NOAA reporting station in Jasper, Georgia.