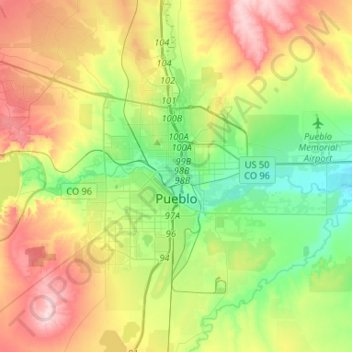 Pueblo has a steppe climate (Köppen BSk), with four distinct seasons. Winter days are usually mild, but the high does not surpass freezing on an average 15.3 days per year, and lows fall to 0 °F (−18 °C) or below on 7.8 nights.[32] Snowfall usually falls in light amounts, and due to the high altitude, and the accompanying stronger sun, rarely remains on the ground for long (typically, for one or two days). January is the snowiest month, followed by March, and the seasonal average is 31.8 inches (81 cm);[32] however, snow is uncommon in October, and in May or September, snow is exceedingly rare, with an average first and last date of measurable (≥0.1 in or 0.25 cm) snowfall being November 6 and April 13, respectively.[32] Summers are hot and dry, with 90 °F (32 °C) or greater highs are on average seen 66.7 days per year, with 100 °F (38 °C) or greater on 10.2 days.[32] Diurnal temperature ranges are large throughout the year, averaging 33.4 °F (18.6 °C).