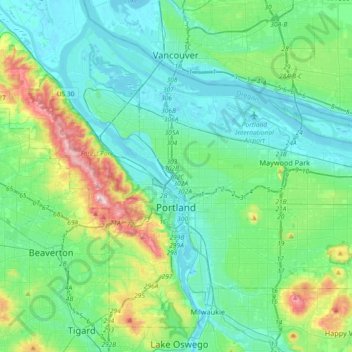 Annual snowfall in Portland is 4.3 inches (10.9 cm), which usually falls during the December-to-March time frame. The city of Portland avoids snow more frequently than its suburbs, due in part to its low elevation and urban heat island effect. Neighborhoods outside of the downtown core, especially in slightly higher elevations near the West Hills and Mount Tabor, can experience a dusting of snow while downtown receives no accumulation at all. The city has experienced a few major snow and ice storms in its past with extreme totals having reached 44.5 in (113 cm) at the airport in 1949–50 and 60.9 in (155 cm) at downtown in 1892–93.