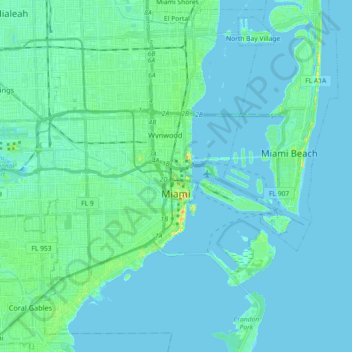 Miami and its suburbs are located on a broad plain between the Everglades to the west and Biscayne Bay to the east, which extends from Lake Okeechobee southward to Florida Bay. The elevation of the area averages at around 6 ft (1.8 m) above sea level in most neighborhoods, especially near the coast. The highest points are found along the Miami Rock Ridge, which lies under most of the eastern Miami metro. The main portion of the city is on the shores of Biscayne Bay, which contains several hundred natural and artificial barrier islands, the largest of which contains Miami Beach and South Beach. The Gulf Stream, a warm ocean current, runs northward just 15 miles (24 km) off the coast, allowing the city's climate to stay warm and mild all year.