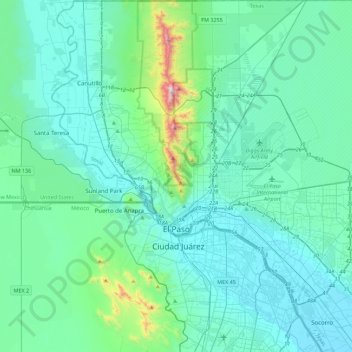 El Paso County was established in March 1850, with San Elizario as the first county seat. The United States Senate fixed a boundary between Texas and New Mexico at the 32nd parallel, thus largely ignoring history and topography. A military post called the "Post opposite El Paso" (meaning opposite El Paso del Norte, across the Rio Grande) was established in 1849 on Coons' Rancho beside the settlement of Franklin, which became the nucleus of the future El Paso, Texas; After the army left in 1851, the rancho went into default and was repossessed; in 1852, a post office was established on the rancho bearing the name El Paso as an example of cross-border town naming until El Paso del Norte was renamed Juarez in 1888. After changing hands twice more, the El Paso company was set up in 1859 and bought the property, hiring Anson Mills to survey and lay out the town, thus forming the current street plan of downtown El Paso.