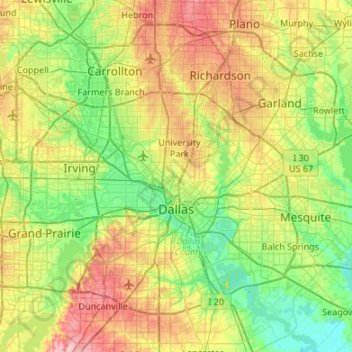 Dallas and its surrounding area are mostly flat. The city lies at elevations ranging from 450 to 550 feet (137 to 168 m) above sea level. The western edge of the Austin Chalk Formation, a limestone escarpment (also known as the "White Rock Escarpment"), rises 230 feet (70 m) and runs roughly north–south through Dallas County. South of the Trinity River, the uplift is particularly noticeable in the neighborhoods of Oak Cliff and the adjacent cities of Cockrell Hill, Cedar Hill, Grand Prairie, and Irving. Marked variations in terrain are also found in cities immediately to the west in Tarrant County surrounding Fort Worth, as well as along Turtle Creek north of Downtown.