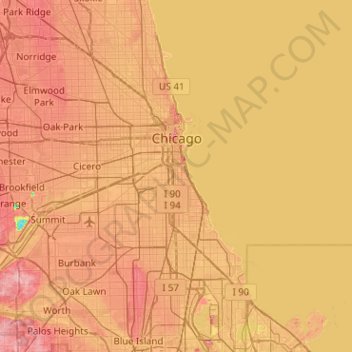 When Chicago was founded in 1837, most of the early building was around the mouth of the Chicago River, as can be seen on a map of the city's original 58 blocks. The overall grade of the city's central, built-up areas is relatively consistent with the natural flatness of its overall natural geography, generally exhibiting only slight differentiation otherwise. The average land elevation is 579 ft (176.5 m) above sea level. While measurements vary somewhat, the lowest points are along the lake shore at 578 ft (176.2 m), while the highest point, at 672 ft (205 m), is the morainal ridge of Blue Island in the city's far south side.