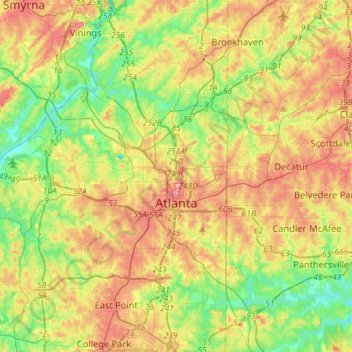 Atlanta is rated as a "beta+" world city that exerts a moderate impact on global commerce, finance, research, technology, education, media, art, and entertainment. It ranks in the top twenty among world cities and 10th in the nation with a gross domestic product (GDP) of $385 billion. Atlanta's economy is considered diverse, with dominant sectors that include aerospace, transportation, logistics, professional and business services, media operations, medical services, and information technology. Atlanta has topographic features that include rolling hills and dense tree coverage, earning it the nickname of "the city in a forest." Revitalization of Atlanta's neighborhoods, initially spurred by the 1996 Summer Olympics, has intensified in the 21st century, altering the city's demographics, politics, aesthetics, and culture.