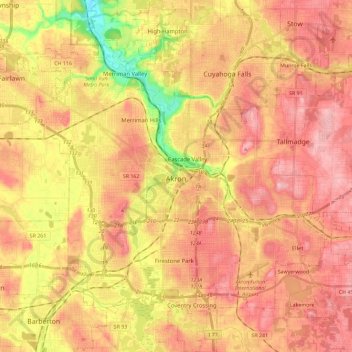 Akron is located in the Great Lakes region about 39 miles (63 km) south of Lake Erie, on the Glaciated Allegheny Plateau. It is bordered by Cuyahoga Falls on the north and Barberton in the southwest. It is the center of the Akron Metropolitan Statistical Area which covers Summit and Portage Counties, and the larger Cleveland-Akron-Elyria Combined Statistical Area. Located on the western end of the plateau, the topography of Akron includes rolling hills and varied terrain. The Ohio and Erie Canal passes through the city, separating the east from west. Akron has the only biogas facility in the United States that produces methane through the decomposition process of sludge to create electricity. According to the 2010 census, the city has a total area of 62.37 square miles (161.5 km2), of which 62.03 square miles (160.7 km2) (or 99.45%) is land and 0.34 square miles (0.88 km2) (or 0.55%) is water.