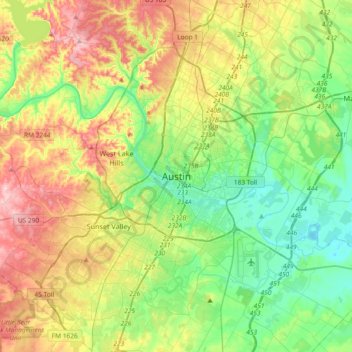 The elevation of Austin varies from 425 feet (130 m) to approximately 1,000 feet (305 m) above sea level.[61] Due to the fact it straddles the Balcones Fault, much of the eastern part of the city is flat, with heavy clay and loam soils, whereas the western part and western suburbs consist of rolling hills on the edge of the Texas Hill Country.[62] Because the hills to the west are primarily limestone rock with a thin covering of topsoil, portions of the city are frequently subjected to flash floods from the runoff caused by thunderstorms.[63][64] To help control this runoff and to generate hydroelectric power, the Lower Colorado River Authority operates a series of dams that form the Texas Highland Lakes. The lakes also provide venues for boating, swimming, and other forms of recreation within several parks on the lake shores.[65]