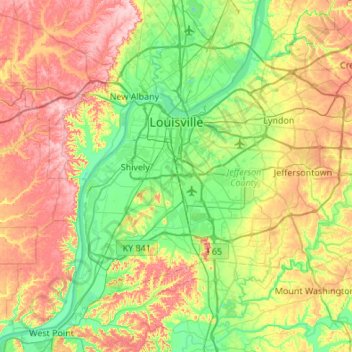 Throughout January 1937, 19.17 inches (48.7 cm) of rain fell in Louisville, and by January 27, the Ohio River crested at a record 57.15 feet (17.42 m), almost 30 feet (9.1 m) above flood stage. These events triggered the "Great Flood of 1937", which lasted into early February. The flood submerged 60–70 percent of the city, caused complete loss of power for four days, and forced the evacuation of 175,000 or 230,000 residents, depending on sources. Ninety people died as a result of the flood. It led to dramatic changes in where residents lived. Today, the city is protected by numerous flood walls. After the flood, the areas of high elevation in the eastern part of the city had decades of residential growth.

Falls of the Ohio State Park