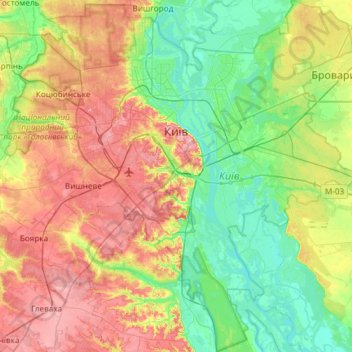 Originally on the west bank, today Kyiv is located on both sides of the Dnieper, which flows southwards through the city towards the Black Sea. The older and higher western part of the city sits on numerous wooded hills (Kyiv Hills), with ravines and small rivers. Kyiv's geographical relief contributed to its toponyms, such as Podil (means lower), Pechersk (caves), and uzviz (a steep street, "descent"). Kyiv is a part of the larger Dnieper Upland adjoining the western bank of the Dnieper in its mid-flow, and which contributes to the city's elevation change. The northern outskirts of the city border the Polesian Lowland. Kyiv expanded into the Dnieper Lowland on the left bank (to the east) as late as the 20th century. The whole portion of Kyiv on the left bank of the Dnieper is generally referred to as Left bank (Ukrainian: Лівий берег, Livyi bereh). Significant areas of the left bank Dnieper valley were artificially sand-deposited, and are protected by dams.