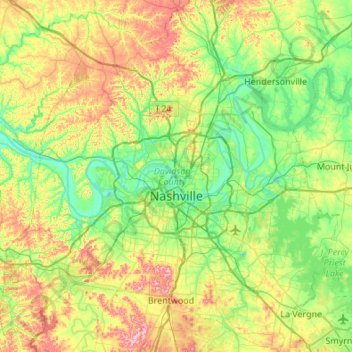 Nashville lies on the Cumberland River in the northwestern portion of the Nashville Basin. Nashville's elevation ranges from its lowest point, 385 feet (117 m) above sea level at the Cumberland River, to its highest point, 1,163 feet (354 m) above sea level in the Radnor Lake State Natural Area. Nashville also sits at the start of the Highland Rim, a geophysical region of very hilly land. Because of this, Nashville is very hilly. Nashville also has some stand alone hills around the city such as the hill on which the Tennessee State Capitol building sits. According to the United States Census Bureau, the city has a total area of 527.9 square miles (1,367 km2), of which 504.0 square miles (1,305 km2) of it is land and 23.9 square miles (62 km2) of it (4.53%) is water.