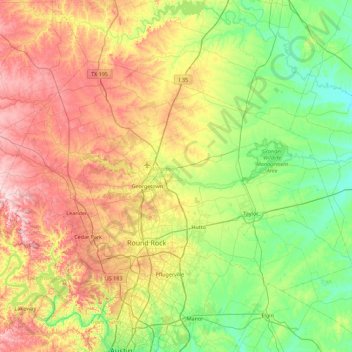 The area is divided into two regions by the Balcones Escarpment, which runs through the center from north to south along a line from Jarrell to Georgetown to Round Rock. The county's western half is an extension of the Western Plains and considered to be within the eastern fringes of Texas Hill Country; it has an average elevation of 850 ft (260 m). It features undulating, hilly brushland with an abundance of Texas live oak, prickly pear cactus, and karst. The county's eastern half is part of the Coastal Plains and is flat to gently rolling with an average elevation of 600 ft (180 m). It has dark clay and rich, fertile soils for agriculture, but is quickly being developed as the county's population continues to increase and expand out. Williamson County is drained in the center and south by the San Gabriel River, the county's only river, and in the north by creeks that run into the Lampasas and Little Rivers north of the county line.