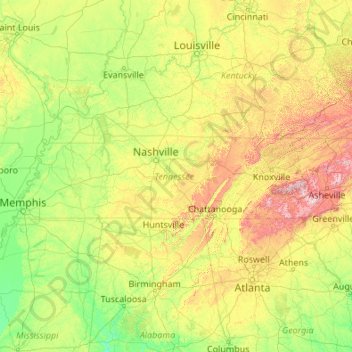 Tennessee has diverse terrain and landforms, and from east to west, contains a mix of cultural features characteristic of Appalachia, the Upland South, and the Deep South. The Blue Ridge Mountains along the eastern border reach some of the highest elevations in eastern North America, and the Cumberland Plateau contains many scenic valleys and waterfalls. The central part of the state is marked by cavernous bedrock and irregular rolling hills, and level, fertile plains define West Tennessee. The state is twice bisected by the Tennessee River, and the Mississippi River forms its western border. Its economy is dominated by the health care, music, finance, automotive, chemical, electronics, and tourism sectors, and cattle, soybeans, corn, poultry, and cotton are its primary agricultural products. The Great Smoky Mountains National Park, the nation's most visited national park, is in eastern Tennessee.