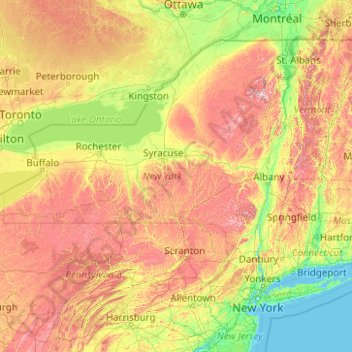 New York has a diverse geography. The southeastern part of the state, the area known as Downstate, includes Long Island and several smaller associated islands, as well as New York City and the lower Hudson River Valley. The much larger Upstate New York area spreads from the Great Lakes to Lake Champlain, while its Southern tier region extends to the border of Pennsylvania; Upstate includes a diverse topography and range of regions including the Adirondack Mountains in the northeastern lobe of the state and the Catskill Mountains in the southwestern part of the state. New York also includes several ranges of the wider Appalachian Mountains. The east–west Mohawk River Valley is the primary river valley bisecting more mountainous regions, and connects to the north–south Hudson River valley in the Capital Region of New York. Western New York is part of the Great Lakes region and borders the Great Lakes of Lake Ontario and Lake Erie, as well as Niagara Falls. Between the central and western parts of the state, New York is dominated by the Finger Lakes, a popular vacation and tourist destination.